For those of you who know me well, it probably isn’t surprising 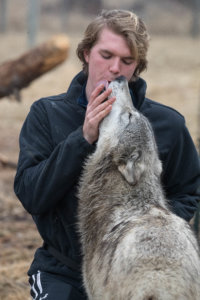 that I spent another three months at Wolf Park after returning from Madagascar. My first internship was truly life changing. The staff and volunteers were passionate about their work and so gracious in sharing their knowledge. And the animals of the park invaded my heart and soul. My experience at the park left me eager to return as soon as possible. And my wish came true when the intern coordinator and fox curator, Kimber, invited me to return for an enhanced internship.

So, I returned to rural Indiana in January. Nothing prepared me for the brutal cold of a Midw 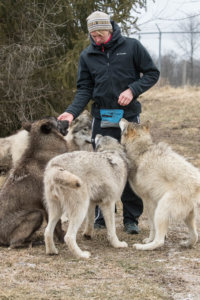 est winter. Thankfully, the warmth of the animals and people took away some of the chill. Within an hour of arrival, I was back in the fox enclosure to visit Scarlett and Joker, the red fox       ambassadors, and at the fence lines of the wolf enclosures. Even though icy wind was burning my skin, I had to say hello the wolf “pups” from last summer. The pictures from the past few months didn’t convey just how much they’d grown. No longer puppies, they were now hulking canines. They came bounding across the enclosure when we called. Every single pup seemed excited and clearly remembered me, which was my hope. Khewa, who chose to develop a close connection with me last summer, was ecstatic. She jumped up and down, rubbed against the fence, wriggled her whole body, and tried to lick me through the chain link. My heart melted. 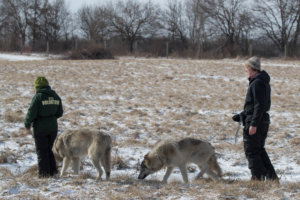 of the other adult wolves. Over the course of three months, I was given so much opportunity to help train and walk the pups. I even had the chance to walk Wolfgang and Wotan, the rowdy 12-year-old males. Because of my established relationship with the wolves from last summer, especially the pups, I was able to continually advance to higher level interactions such as bringing a bait bag (treat pouch) in with most of the wolves each time I went in with them. Helping train and walk wolves, sometimes up to four times a week, was incredible and helped me grow exponentially as a trainer. 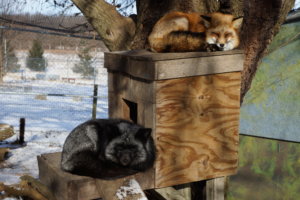 My first time at Wolf Park was for the wolves. This time was for the foxes (and Khewa of course). Enhanced interns get lots of free reign with the foxes, because unlike the wolves, interns and volunteers can be cleared to go in their enclosures without staff. This resulted in 3 months of constant fox time. Every day, I went in with the red foxes, Scarlett and Joker. My relationship with Scarlett developed quickly and it wasn’t long before she let me hold her upside down in my lap. Joker, a shier fox, took a little more time, but eventually, he too accepted my friend request and even started soliciting belly rubs from me.

The grey foxes were a slightly different story. Gypsum let 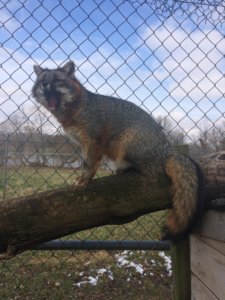 very few people into his inner circle and Hunter was a very shy fox. But I was so excited to work on my relationships with them and attain higher clearances with them. Working with these two taught me so much about training. They were my favorite animals to work with. I worked up to the level 3 clearance with them, meaning I could bring a bait bag in their enclosure and train them without needing staff supervision. This was one of the most rewarding experiences I’ve had at Wolf Park. And when Gypsum fell ill a week later, it broke my heart. I could write paragraphs about him, but his life and his legacy are preserved in the heartfelt words of Wolf Park’s fox curator, Kimber. I was just thankful I could be a part of his life for a short time and could join in the celebration of his life at his funeral, the day before I left the park. 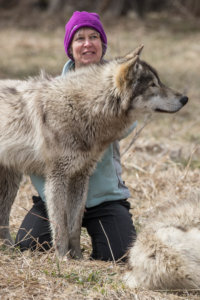 months at Wolf Park were filled with joy and happiness. But it was also filled with heartbreak and grief. And it was difficult to not let Gypsum’s death overshadow the good experiences. Especially because there were some really good times; like making a few excellent new friends among the winter/spring interns, developing deeper relationships with the staff and animals of the park, and even getting a visit from my mom, who got to meet almost every animal in the park. It was an incredible journey once again at Wolf Park and I’m so glad I was there this winter and spring, despite the heartaches. I’m already looking forward to coming back to the park next year!