This summer, I spent 10-weeks as a research assistant for a project studying the spatial 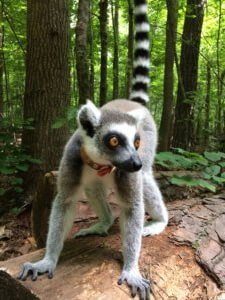 distribution of scent marks among free ranging ring-tailed lemurs at the Duke Lemur Center. In simpler words, my job was to note the location of each scent mark that my focal lemur distributed. The overall goal of the project was to determine if scent marks were distributed randomly across their habitat or if the scent marks were condensed along the borders they shared with neighboring ring-tail groups and around their feeding areas. We also collected behavioral data and amassed over 200 hours of observations. But in no time at all, I fell in love with the ring-tailed family I studied. Sophia, the dominant female of the group (female dominance is common in almost all lemur species), was a kind and gracious leader to her family. Randy, the male of the group, was astoundingly patient with his daughters, even when they pulled his tail or forced him to engage in play. Narcissa and Nemesis, the two-year-old twin sisters, were a constant source of entertainment with their wild antics and playfulness. 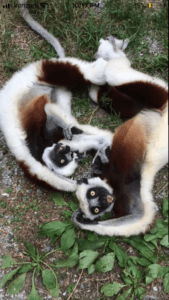 he natural habitat enclosure (NHE2) I worked in was 8.1 acres and was also home to a family of four Cocrquel’s Sifaka and a pair of Red Fronted Lemurs. The Sifaka instantly became one of my favorite lemur species. Their mode of terrestrial travel appears more like dancing as they take bounding sideways leaps across the terrain. And this species hated mosquitoes and flying insects more than any creature I have ever seen. They would swat frantically at the insects that swarmed in the ever humid summers of Durham, North Carolina. The pair of Red Fronted Lemurs also added a very special touch to my summer. I first encountered Red Fronted Lemurs in Madagascar and found them to be extremely curious and vocal creatures. The two at the DLC were no different. At twenty-four years old, they had been free-ranging in NHE2 their entire lives. They ran the show and were the most dominant species in the enclosure. They could displace any lemur, whether it was to get a preferred lounging area in the shade or to take custody of a feeding bowl.

Within the first week of research, I noticed something that completely changed my summer.

A grey fox in my designated lemur enclosure! The enclosure was predator proof, but grey foxes are excellent climbers, and can squeeze through small gaps or through drainage pipes, so there is no easy way of keeping them out. Occasionally, the fox would emerge in an area near lemurs (most commonly the lemur feed site to scavenge leftover primate biscuits). This presented a unique opportunity to study the behavioral responses of lemur species to a small, non- 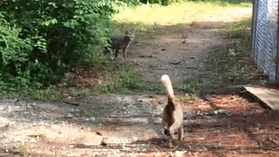 Malagasy canid species. Although the fox was not a threat to the lemurs (and in fact was more wary of the lemurs than they were of it), the lemurs responded to the canid with antipredator behaviors like alarm calling and vertically retreating. The behavioral responses suggest how lemurs may react to domestic dogs and cats in Madagascar, an actual threat to these endangered species. Because of the limited research on lemur anti-predator behavior to visually perceived threats, I decided to write a research proposal to the Duke Lemur Center and collect this data for further analyses.

I designed the methods of data collection, created an ethogram for the behavioral responses of lemurs and foxes within the encounters, collected data opportunistically using narrated video recordings, and input this data into excel. Overall, sixty lemur-fox encounters were recorded. The data is currently being analyzed and I plan to publish the results in a primate or animal behavior journal.

Just as I was beginning to formulate the outline of the lemur anti-predator behavior research, I noticed something else in the enclosure: baby foxes (kits). In the coming weeks, I determined that there were, in fact, three adults and five kits living in the enclosure. Because there is a very incomplete understanding of grey fox behavior and 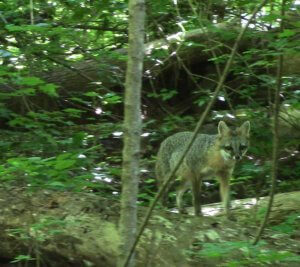 family structure, I started collecting data on the foxes at the same time I started the lemur anti-predator behavior research. The lack of scientific literature on grey foxes is largely due to the elusive nature of grey foxes. But the foxes in the lemur enclosure were semi-habituated to people due to the almost constant presence of humans in the enclosure, between researchers and animal care staff. This partial habituation allowed me to actually follow the foxes on my off days or while the lemurs were taking a nap (my coworkers graciously watched my focal lemur and alerted me if he or she woke up).

Luckily, my internships at Wolf Park included working with and analyzing the behavior of the captive grey foxes, which gave me the solid background needed to study this species in the wild. Kimber Hendrix, the fox curator at Wolf Park, also agreed to help analyze data, interpret behavior, and assist in the writing of the papers that will come from this data. Another valuable connection over the summer was Patrick Ross, a student from Appalachian State and an employee of the Duke Lemur Center, who happened to be 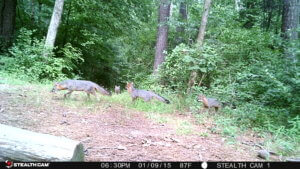 preparing for a large-scale trail camera study in Madagascar. Patrick graciously loaned me a total of 17 trail cameras and set them up near the dens and commonly utilized fox areas of the enclosure that I had discovered. This allowed for the capture of behaviors on film that I might not have seen in person as well as provided information on their nighttime activity.

Not knowing how busy my summer would end up being, I accepted a remote internship with the Jane Goodall Institute’s Community Engagement Department. Despite the added responsibility, I enjoyed every aspect of this experience. I updated and organized Gombe research publication spreadsheets, summarized a Gombe Stream Research Centre Report, and wrote blogs for the JGI news site Good For All News to name a few things. I will still be writing blogs for the next month and will update my new Advocacy page on my website as new pieces are published.

mmer was a dream come true. I was able to spend almost every day with lemurs, one of my favorite groups of primates. I was able to conduct my own research on anti-predator behavior in lemurs. And I was able to study the interactions, behavior, and vocalizations of a grey fox family. Studying lemurs (the most primitive group of primates) and grey foxes (the most primitive canid species) simultaneously was surreal and something I never would have expected. The data entry involved with these research projects and the writing involved with my JGI internship left little time to relax. But the opportunities this summer presented and the potential for several publications was worth the late nights spent staring into a computer screen.