From the moment I stepped onto the dirt runway in Kigoma, I felt right at home (not so much in Dar – cities are not my thing). The researchers who picked me up were warm and welcoming. And the rest of that first day was spent at a beach, watching waves crashing on the shore (Lake Tanganyika is the second largest and second deepest freshwater lake in the world), eating baked potatoes and avocado salad as the sun set and the stars lit up the night sky.

The next day, after a whirlwind of shopping at the market, 6 people and 2 weeks of food and supplies for the 18 or so people at camp were packed into a Land Rover, and we trundled off to the bush. Three hours later, we left paved roads and dirt roads behind and were bouncing along a path so narrow we had to tuck in the side mirrors. A couple of broken eggs later (the stack of egg trays was perched on my lap, so this was slightly unfortunate for me) and we had arrived at camp. 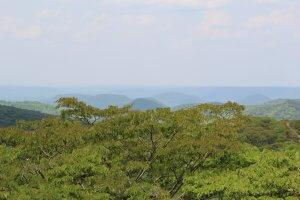 The cooks, field assistants, and other researchers greeted me with “Karibu Tanzania” and “Karibu Campi.” On my tour of camp, when we were at the highest peak, I was greeted by panthoots and screams from the resident chimp community echoing across the surrounding valleys.

What a way to be welcomed to camp!

Immediately, I was comforted by the prospect of making a tent my home for the next 6 months. An added bonus: my tent contained a mattress and was large enough to actually stand upright! What luxuries! 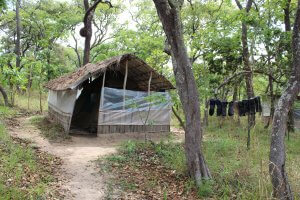 The prospect of bathing in a river seemed like fun as well until I gave it a go that first afternoon. It brought back too many memories of ice baths during track and cross-country season. From that day forward, I brought a cup to the river. No more submerging any part of me again. 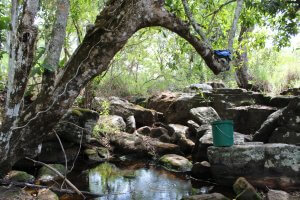 Even though camp is only a few miles from a fairly well-traveled dirt road, it is truly in the middle of the bush. One of my first afternoons at camp, someone saw a black mamba looped around a branch next to the river while they were bathing. Recently, I almost stepped on a puff adder on my way to the toilet. Numerous other reptilian friends (ones with legs) sun themselves on the rocks at camp and I can’t even count how many days I’ve had to maneuver my way through a troop of baboons on my way to bathe. Blue duikers come sniffing around our tents at night. Packs of hyenas whoop to one another right outside our tents at night and occasionally we hear them near camp on our way out into the field in the morning. Leopards have been sighted traveling right outside of camp. And one recent morning, all of camp was awoken by chimps vocalizing 50m from camp at 5:30am.

The food at camp – consisting almost entirely of beans and rice – made for a rough adjustment period at first. But weirdly enough, two and a half months later, I’m actually beginning to crave beans when I get hungry. A good thing since beans are a staple of every meal! For dinner, we get a piece of fruit or vegetable. And instead of rice we either have ugali, potatoes or plantains, or (about once a week) mini loaves of bread or two pieces of chipote (circular flatbread). On bread nights, we typically get a hard-boiled egg. The best dinners are the bread nights after someone takes a trip to Kigoma because then there’s often the treat of a half an avocado.

The landscape when I arrived was unlike anything I’ve seen before. The rocky mountainsides were covered in sparse, bare trees and tall yellow/dead grass, while the valleys and plateaus contained thin strips of dark green forest. For the first month, fires were frequent, and we often hiked through ash and the smoldering trunks of fallen trees or branches. Two months later (after some heavy rains) and almost everything is now green. The woodlands covering the slopes and most of the plateaus sprouted leaves almost overnight and green grass is now poking out among the leftover dead grass. 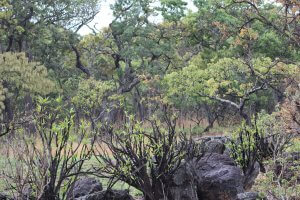 This type of landscape is called a savanna-mosaic environment. Aptly named, because it is truly a mosaic of habitats. Fifteen-foot cacti grow alongside strips of lush green forests. And after more rains come, swamps will form in patches amongst the forests, woodlands, and grasslands. It’s difficult to become bored of this ever-changing environment.

My first day in the field I found myself trekking over 10 miles, sliding down rocky slopes, hiking through valleys, and scrambling up mountainsides. We were following chimps we had spotted from across a valley, but once we had caught up to them, we realized these were unhabituated chimps – not part of the semi-habituated chimpanzee community. Most of the other chimp days have been much more successful, although they often still involve lots climbing and sliding down slopes.

Some of my days entail following around a troop of baboons – the same troop that is often found wandering through camp or foraging by the river where we bathe. Other days consist of random shifts with some of the various projects here at Issa – phenology, termite mound research, and trail camera maintenance. 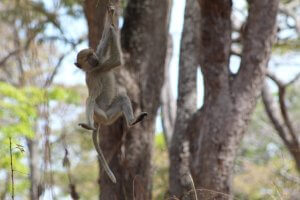 My own research, however, is on red-tailed monkeys. I follow two habituated groups of this species, each for 7-10 days every month. My main project is studying their diet. This species is typically found in rainforest environments and thus, the only dietary research conducted on this species has been in that type of habitat. Studying their diet in a savanna-mosaic environment will help extrapolate their dietary adaptability and to what extent they exploit the different habitats in their home ranges. For me, this means lots of group scans, collecting (and pressing) lots of plant samples, and trying to learn as many plant species as possible. This also means five consecutive 14-hour days of fieldwork for each group to collect the amount of data I need. Although I never expected to be doing feeding ecology research, I am loving this work. It’s exciting to collect a new plant species that the monkeys have consumed (almost like a treasure hunt). And it’s quite enjoyable to learn, and sometimes try, the numerous fruits that the monkeys eat (although more on that later). 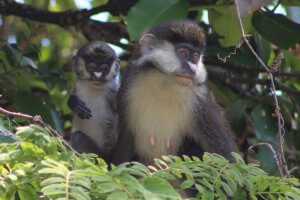 I already have so many stories and experiences from these past two and a half months that I can’t possibly include them all in one blog. But I will try, in between the 14-hour days chasing monkeys, to type up these memories and share them.

Asante sana (thank you very much) for keeping up with this journey of mine!