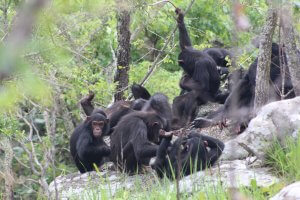 Chimpanzee communities are known to exhibit community-specific behaviors. Some communities even exhibit dietary differences despite having access to similar food sources. Whether or not this is culture is up for debate.

I have been privileged to spend almost half of each month following the chimps here at Issa. I’ve witnessed two “cultural” behaviors. I’ve also observed many of the fascinating behaviors discovered by Jane Goodall in the 1960s that changed how we view humankind and one of our closest living relatives (don’t forget about bonobos being just as closely related to humans as chimpanzees).

I saw my first “cultural behavior” during one of my first chimp shifts. It is known here as a “grooming hand clasp.” Chimp communities often have specific methods of grooming that are unique to their community. The grooming hand clasp is performed when two chimpanzees each raise an arm to the sky and clasp each other’s hands, while one individual grooms the other. It is a very endearing behavior. 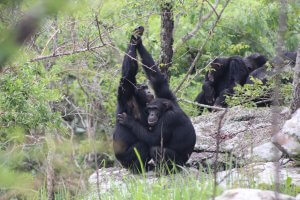 The second cultural behavior I have observed is “termite fishing.” It is unknown why some chimp communities will termite fish while others do not, even if termite mounds can be found in their home range. However, termite fishing is one of the behaviors that forever altered the way we view animals. Chimpanzees were the first species other than humankind observed to use tools! They fish for termites by stripping a long, pliable piece of bark from a sapling or branch and sticking it into a termite mound. Termites grab onto the “threat” with their mandibles (pinchers) and are pulled out of their mound and promptly consumed. Termite fishing starts at the beginning of the rainy season – which is also when termites begin their reproduction cycle of the year – and ends a couple months later. 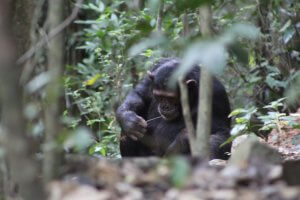 Along with these cultural behaviors, the chimps at Issa exhibit many other behaviors and characteristics that make them so unique.

Some are quite intimidating to witness. Which is the point… Chimp “culture” is very male dominated. And to show their dominance, males will perform showy displays of strength. This can involve throwing their strength upon small trees to bend and snap branches, or even carrying and throwing branches at other chimps. Usually accompanied by loud screams from any chimps in the vicinity, the whole scene can be a bit unnerving if you’re close by. Especially unnerving is when male chimps saunter toward human observers and sit just a few meters away staring at us (we have one chimp in particular that will do this). Eye contact is often taken as a threat, so we avert our eyes and try to look extra small when this happens. Occasionally a male chimp will even run toward people (sometimes with their backs turned), slapping the ground or tree trunks as he goes along before swerving off in a new direction. 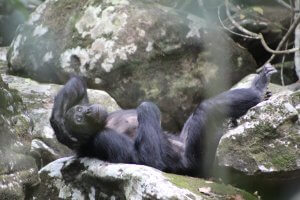 Chimpanzees, like most species, fear people. For us to study chimp behavior they have to be slowly habituated to the presence of humans. Lucky for me, the chimps at Issa (after several slow years) are reaching the end of their habituation process and beginning to ignore humans for the most part. The exception is the male chimps that occasionally test the nerves of the human observers.

The newly habituated chimps allow us to observe some of the subtleties of chimp behavior. Things like large adult males gently playing with a tottering infant. Or a mother tapping her back as she walks past her infant to tell her child to hop on.

Chimpanzees also display the artful skill of making nests. Yes, one of our closest relatives makes nests, like a bird. They bend a multitude of leafy branches high up in the trees to make a new nest each night. Sometimes they even make “day nests” when they have an extra lazy day and want to be more comfortable. I’ve even seen a subadult male chimp display his creativity while he was lounging on a rock. He looked at his surroundings, grabbed a nearby sapling, pulled it down so its leaves covered his rock, and promptly laid back down.

Although the chimpanzees here are habituated, it is still quite easy to lose track of them when they travel quickly along the mountainsides filled with lianas and thickets. When we lose them, we rely on vocalizations to find them again. It is rare that a full day goes by without a chimpanzee group starting a chorus of pant hoots and screams. Sometimes they vocalize seemingly to just hear their own voices. Sometimes it’s to exchange vocalizations with other groups within their community across valleys. And sometimes they vocalize during or after a rain, while shaking branches or charging around on the ground. These are known as rain displays and you can almost feel the exhilaration and awe of the individuals during these experiences. 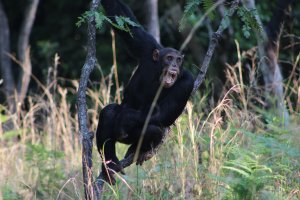 The larger the group, the more often they send their voices echoing throughout the valleys. We have approximately 26 individuals in the community here and they form smaller groups to forage and travel together. Although it is somewhat rare for all the individuals to travel together, it does happen occasionally. On one of these occasions, we lost the chimpanzees briefly as they ran up the side of a mountain while vocalizing. When we reached the group a few minutes later, they had a dead bushbuck (a hoofed deer-like animal) up in the trees. They had successfully hunted! A large male carried his prize through the treetops and then back on the ground. Various individuals, even a mom and her infant, clutched pieces of meat in nearby trees. Eventually almost the entire community gathered around the kill, sharing meat with every individual, from the biggest male to the smallest infants. 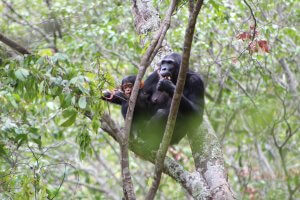 If you ask me, chimpanzees have culture. Maybe culture isn’t the right word… It’s impossible not to view other species through the lens of our anthropocentric worldview. But I feel something akin to culture during rain displays. I see it in the grooming hand clasp. And I find it in the leftover tools at termite mounds. And it is an extraordinary privilege to have fleeting glimpses into the world of one of our closest living relatives. 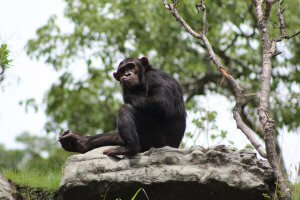