The last six months of my life have been consumed by red-tailed monkeys. I only spent ten days each month with these monkeys, but my red-tail research involved 14-hour work days. I woke up, ate breakfast, and hiked to wherever the monkeys slept the night before. I was with them from dawn to dusk, inputting “feeding scans” into a tablet every 15 minutes and collecting samples of new plant species that the monkeys consumed. I left at 7pm, after having been with the monkeys for 12 hours, to make the trek back to camp. After a quick shower and dinner, I pressed the plant samples of the day, and finally, crashed for some much-needed sleep before repeating the process the following day. My work with the red-tails resulted in me being given a most fitting nickname: Kaka Kima. Which means “brother red-tail monkey” in Kiswahili.

Even though I never expected to be doing a feeding ecology project on primates, least of all red-tailed monkeys, I found the work very enjoyable. The monkeys hung out in beautiful areas, sometimes near stunning waterfalls, and ate such a variety of fruits and plant parts that I felt like I was on a never-ending scavenger hunt for plant samples. Over the course of my six months, I collected and pressed over 150 plant samples to send to a botanist in Dar es Salaam (the capital of Tanzania). The feeding scans amounted to approximately 2,000 data points which will be used to determine dietary trends within this population of monkeys. The primates living in this area are unique because they live in a savannah-mosaic environment consisting of strips of forest surrounded by miombo woodland and savannah habitats. Red-tail monkeys are typically found and studied in rainforest habitats. The field site where I have been doing my research (Issa) is home to the only long-term study of red-tail monkeys in a savannah-mosaic environment. And the feeding ecology project will be the first to determine the dietary adaptations of this species to a savannah-mosaic environment. 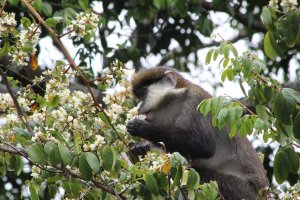 Red-tails are known to eat a variety of fruits, flowers, leaves, insects, occasionally mushrooms, and very occasionally meat, such as small birds. One of the obvious trends I have found in the red-tail diet at Issa was a love of mushrooms. At other field sites, mushroom consumption is quite rare. But here, when the mushrooms begin to pop out, the red-tails go into a feeding frenzy. They race to the ground, grab a mushroom, and scamper back into a tree clutching their prize (often bigger than their own head). 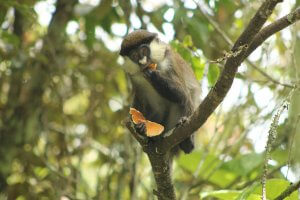 The monkey antics can be endlessly entertaining. Nevertheless, even the most interesting work can become a bit monotonous if it done for 12 hours a day. Especially, because unlike what is often portrayed in nature documentaries, nature operates very slowly. Exciting events like inner-species encounters and new births do not happen every other day. Most days nothing out of the ordinary happens. But after six months of field work, rare and exciting events do tend to add up. 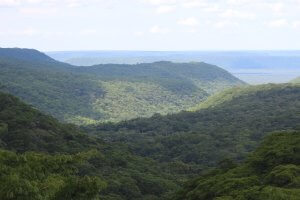 The two times I ran across predators happened during red-tail monkey follows. Both times, the monkeys alerted me to predator presence long before I caught a glimpse of the animal. The first predator encounter was with two lions – detailed in a separate blog. The second was with a leopard. When the monkeys alarm called, I immediately knew a predator was close by (it sounded just like their alarm calls during the lion encounter). The only question was what kind of predator. I was on the outside of the forest and watched the monkeys all congregate in one area, look down, and vocalize as loudly as they could muster. Finally, I caught a glimpse of a long tail, and moments later the field assistant I was with noticed a leopard’s face looking up at him about 20 meters away. The leopard had no desire to be near us, or the obnoxiously loud monkeys (predators rely on stealth to hunt their prey), and disappeared back into the forest in the opposite direction. 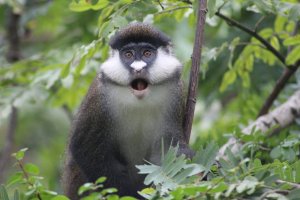 During another red-tail monkey shift, I almost stepped on a python longer than I am tall. This time though, the monkeys were not close enough to notice the snake so there were no warning calls for me. Luckily, the python had recently eaten (it had a large lump in its midsection) and was interested only in moving away from the bumbling human.

One of the coolest red-tail moments I witnessed was a group of subadult and juvenile red-tails leaving the trees to play in an ash-strewn landscape just outside the forest. The miombo-woodland and savannah habitats that surround the forests often burn during the dry season due to the extreme heat and dryness. This of course turns many fallen trees into ash. The monkeys took full advantage of this opportunity. They tumbled through the ash and threw it into the air like they were kids playing in the first snow of the winter. (for a short clip of their ash party, click here)

The terrestrial behavior of the red-tails at Issa is another unique aspect about this population of monkeys. The subadults and juveniles frequently leave the trees to play on the ground. And monkeys of all ages leave the trees to rest, travel, forage for food, and sometimes even to engage in grooming sessions. Terrestrial behavior of arboreal monkeys is quite rare, so I decided to collect data on this unique behavior. I gathered four months of data on terrestrial behavior on the two groups of monkeys and hope to publish the results if there is enough data to work with. 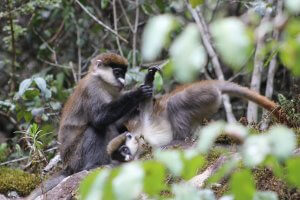 The 14-hour monkey days not only provided me with multiple data sets, but also provided ample opportunity to learn and practice Kiswahili. Thankfully, by the end of my six months, I was mostly conversational when it came to “in the field” Swahili – because I ended up needing to train a new field assistant to collect my feeding data for the next six months. Luckily though, he could speak some English, so whenever I didn’t know how to explain something in Swahili, I could usually communicate in a broken mix of Swahili and English and get my point across. Most of the field assistants knew a little English, some knew none, and one was fluent. Regardless, friendships were formed. And communication and attempts at conversation were typically full of laughter (and sometimes charades) and were one of the highlights of my time in Tanzania. 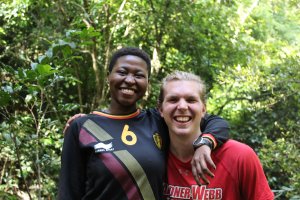 I will sorely miss my spending time with my Tanzanian friends, watching red-tails play wrestle on the forest floor, collecting new plant samples, and learning new Swahili words. Of course, field work is rarely glamorous, and I can’t even count how many times I was peed and pooped on, or had to army crawl through dense thickets of lianas or lost the monkey groups during a rainstorm. But for me, the hardships were a small price to pay for living out my dream of studying African primates, forming cross-cultural friendships, and learning a new language. 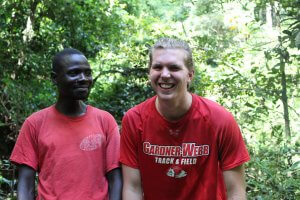