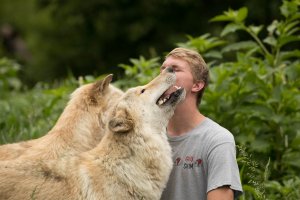 My summer at Wolf Park came to a close a couple weeks ago, and I am already missing the two legged and four legged residents of the park. The internship was a whirlwind of once in a lifetime experiences, ranging from seeing dental surgery performed on a fox, to forming relationships with wolf pups as they grew into adolescents.  Everything was much more hands on than I expected from an internship with apex predators. Interns were tasked with most aspects of husbandry, such as butchering road kill, feeding and medicating animals, training wolves and coyotes through the fence, and free training foxes. 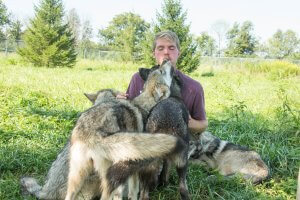 The big news of the spring for Wolf Park was the arrival of five wolf pups, the first pups the park had raised in five years. Because wolves are naturally neophobic (scared of new things), the socialization process of the pups is an intensive 3,000+ hour project. The pups need to learn at an early age that wheelchairs, golf carts, crowds, and loud children will not harm them, and are a part of a typical day at Wolf Park. Because the wolves are used for research and educational purposes, and will never be placed in the wild, it is important for them to experience as little stress as possible around crowds, vehicles, and strange noises. They would naturally be afraid of these things if not for the training and desensitization protocols that are in place. Interns assisted in the socialization process by scheduled “puppy help” shifts throughout the summer, as well as assisting with their training and desensitization as the summer progressed. We watched the puppies grow from about 10 pounds at the beginning of the summer, to 50-60 pounds by August. 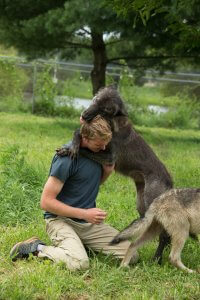 Because of the immense amount of time spent near or with the animals, it was easy to develop close relationships with many of the animals within the span of a few months, making it very hard to leave. Fiona, a black phase 5-year-old female, is a good example of this. I didn’t meet her face to face until about halfway through my internship because she didn’t always like making new friends. However, the moment she met me, she licked all over my face (mostly in my mouth) and began to scent roll and crawl on me. And each time she interacted with me after that, she did the same thing. In my last visit with her before I left, she had barely greeted me before she flopped on the ground and presented her belly for scratches, something that most adults won’t do unless they are very comfortable with a person.  Khewa is another example of the relationships I formed at the park.  She was one of the puppies, and was less than 10 pounds when I first met her. After a couple of interactions with her at the 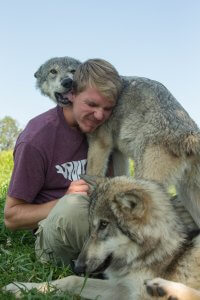 beginning of the summer, she began using me as a comfort person when she was frightened. And any time I entered the enclosure, she would make her way to me as quickly as she could and flop on her back for scratches. The close bonds I formed with Fiona and Khewa made my internship incredibly special.  And between these relationships and the vast amount of knowledge imparted to me from staff and volunteers, I left Wolf Park with a lifechanging new perspective on canine conservation. 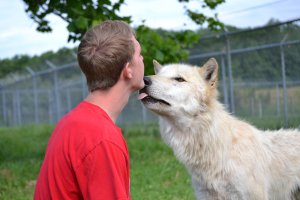 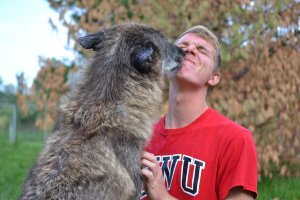 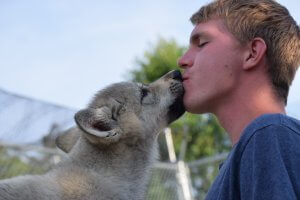